Let me start by stating that for what’s available on the web today, Dropbox is by far the best at what it does. I’ve tried many competitors and always came back to Dropbox.

Then, one might ask, “why on earth are you dropping the service?”

While Dropbox may be the best service for syncing files across the web, the business of syncing files on the web, simply doesn’t work for my workflow. That is—at least how it works currently. Here’s Why:

On the average day, I work with a pretty large chunk of files. A single project can include dozens of images and multiple Photoshop files each in excess of 300 MB. Dropbox itself is more than generous in its allotment of an entire terabyte a subscription—so that’s not an issue.

The problem, however, is that when you’re taking advantage of that allotment, actual computer hard drive space fills up fast. For example, My MacBook Pro has a little over 700 GB of total hard drive space. So, as you might imagine, as I began to fill up the Dropbox on one computer, the other became maxed out.

When it comes time for a bigger, memory-intensive project, you can bet I’m squeezing every ounce of free memory I can. That’s especially the case when Google Chrome continues to consume resources at a stunning rate. When I check memory usage and see it eaten away by a Dropbox process that’s “Downloading File Lists” for hours at a time, I begin to contemplate the “Force Quit” button. 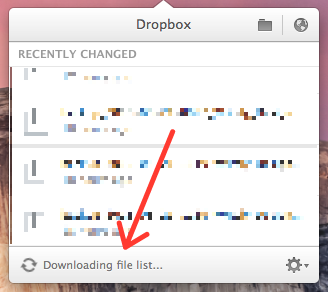 Another individual fed up with the ambiguity of the dreaded “Downloading file list . . .” issue, put it this way:

I’m on the latest Mac OS X using the latest Dropbox client (v3.4.4). It has been stuck in “Downloading file list…” mode forever.

There is no visual indication of progress. No clue about any ETA. No system logs. No detailed activity window.

It’s just sitting there, wasting CPU cycles, leaving me completely in the dark as to what it’s actually doing and how long it’ll take.

Finder integration shows green icons for folders that haven’t synced at all. Others are marked as in progress but completed a while ago. That doesn’t foster a trusted relationship.

It’s a mess and when it comes to your data, it’s one you can hardly stand.

Not to mention how CPU hungry the little sync client gets from time to time.

I Just Need to Share A Couple Small JPEGs!

I work up a lot of comps in a given week. From book cover designs to website mockups, I’m constantly firing off Emails to a wide variety of individuals. In each case, the recipient needs to be able to simply, quickly, and effectively view the work I’ve readied for them.

The problem with using Dropbox in this regard is that it can take up to a half an hour (or more) for it to finish its latest run of updating the file lists. As you might imagine, this simply doesn’t cut it when you just want links to a couple 1 MB PNG files.

Eventually, I ended up signing up for an account with CloudApp which has all but filled this void.

After some experimentation, I eventually settled with a couple of standard external hard drives I setup within my internal network. I also, set up a second 3 TB external backup drive (in addition to offsite backup).

The result has been like a breath of fresh air. No more awaiting files to hit the Dropbox servers before jumping over to another computer. They simply all access the same drive and leave the backup to Time Machine.

If working remotely, it’s just a matter of grabbing the external hard drive and heading out the door. There’s a couple of extra steps to get the networked drive solution up and running, but in my experience, it has created a much more seamless, pain-free daily workflow.

Admittedly, the solutions I’ve mentioned in this article won’t work for everyone. When it comes to teams, an external or networked hard drive isn’t always an option—especially if the team isn’t in the same building.

My hope is that Dropbox will address some of the concerns mentioned by creative teams using the service and create a more usable, seamless experience. Until then, it’s external hard drives for me.

What has been your experience with Dropbox? Does it work for your particular workflow? Feel free to leave a comment on this article to share your thoughts!

12 thoughts on “Why I Dropped Dropbox”