I’m an avid note-taker. Whether in the middle of a Zoom call or coding out a new WordPress website, you can be sure; there will be a plethora of scribbles, sketches, and bullets being made on some sort of medium.

Early on, organizing and locating these notes after the fact led me to buy an iPad Pro with the Apple Pencil. It was the best digital solution I had found to date. The quality and ease of use of both was (and is, in my opinion) unparalleled.

However, after using the Full Focus Planner, that changed for me. Here’s why:

When I first opened up my new 12.9 inch iPad Pro, I was thoroughly impressed. It was well designed, clean, and intuitive.

As time went on, however, I noticed myself using it less and less for note taking. When hopping on a call, I found myself grabbing the nearest piece of paper, a pen and jotting down my notes 1776-style.

One big lesson I learned by using the Full Focus Planner, was that using a paper tool with an ordered methodology can help you become more productive over a digital device that has a vast number of distracting elements baked in. Focus being the operative word.

Something I’ve often mentioned when it comes to design: the simplest solution is usually the best solution. Note-taking is no different. 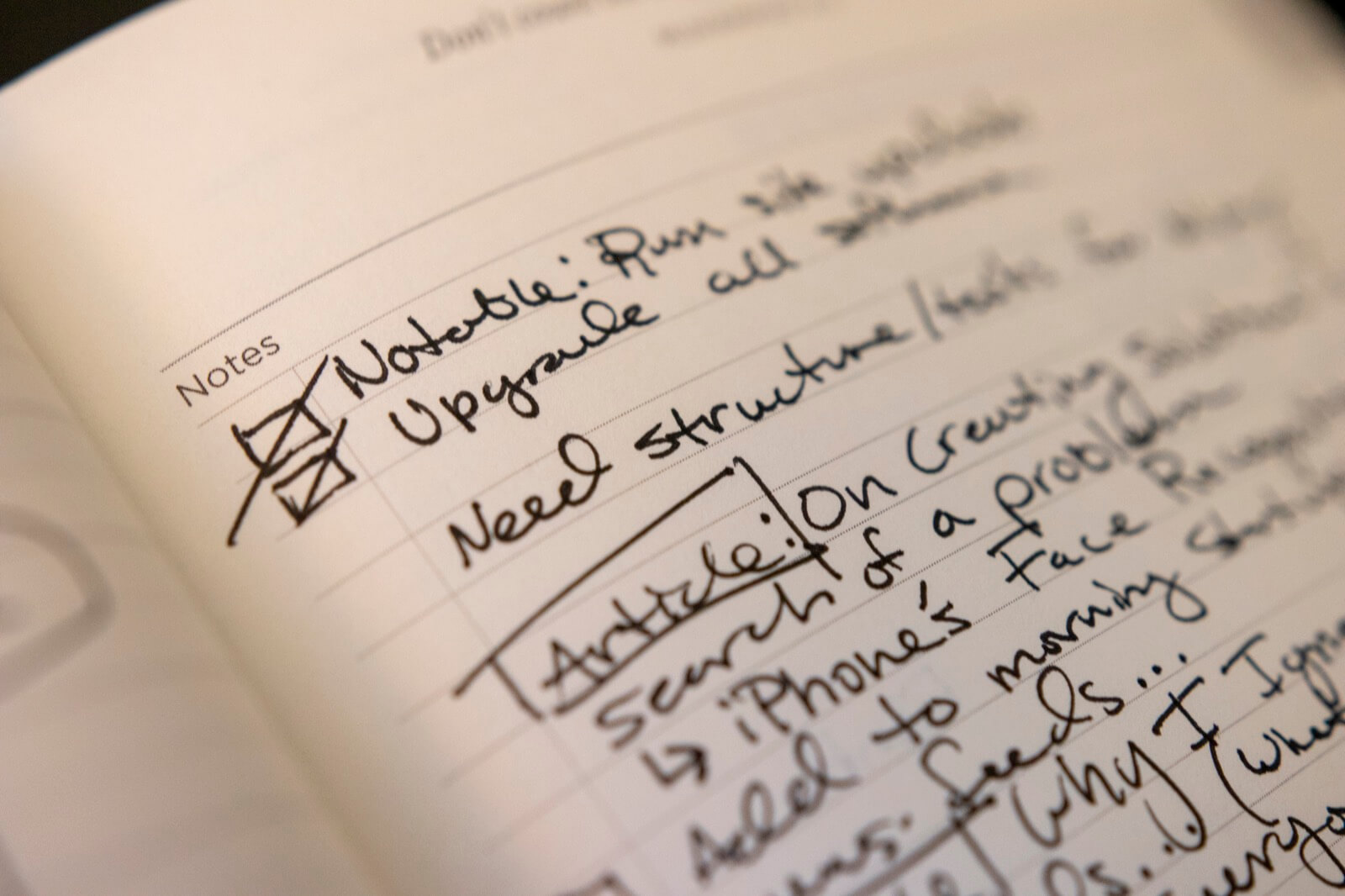 After incorporating the Full Focus Planner and its notes section into my workflow, however, I found that one thirty minute phone call could fill the page in its entirety.

Back to the iPad?

A Different Approach to Note-taking

When I first purchased the iPad, my initial thinking was that I would no longer need to scan all my notes.

Pre-iPad, I would scan all of my notes with the Evernote scanning app on a monthly basis so that I could search and reference these notes moving forward.

Want to know how often I searched through my old notes? Yes, that would be a total of zero. It took a while before I realized this was a gigantic waste of time.

This happened because I didn’t realize what notes are for.

Notes are meant for brainstorming and developing an idea, not mere documentation. 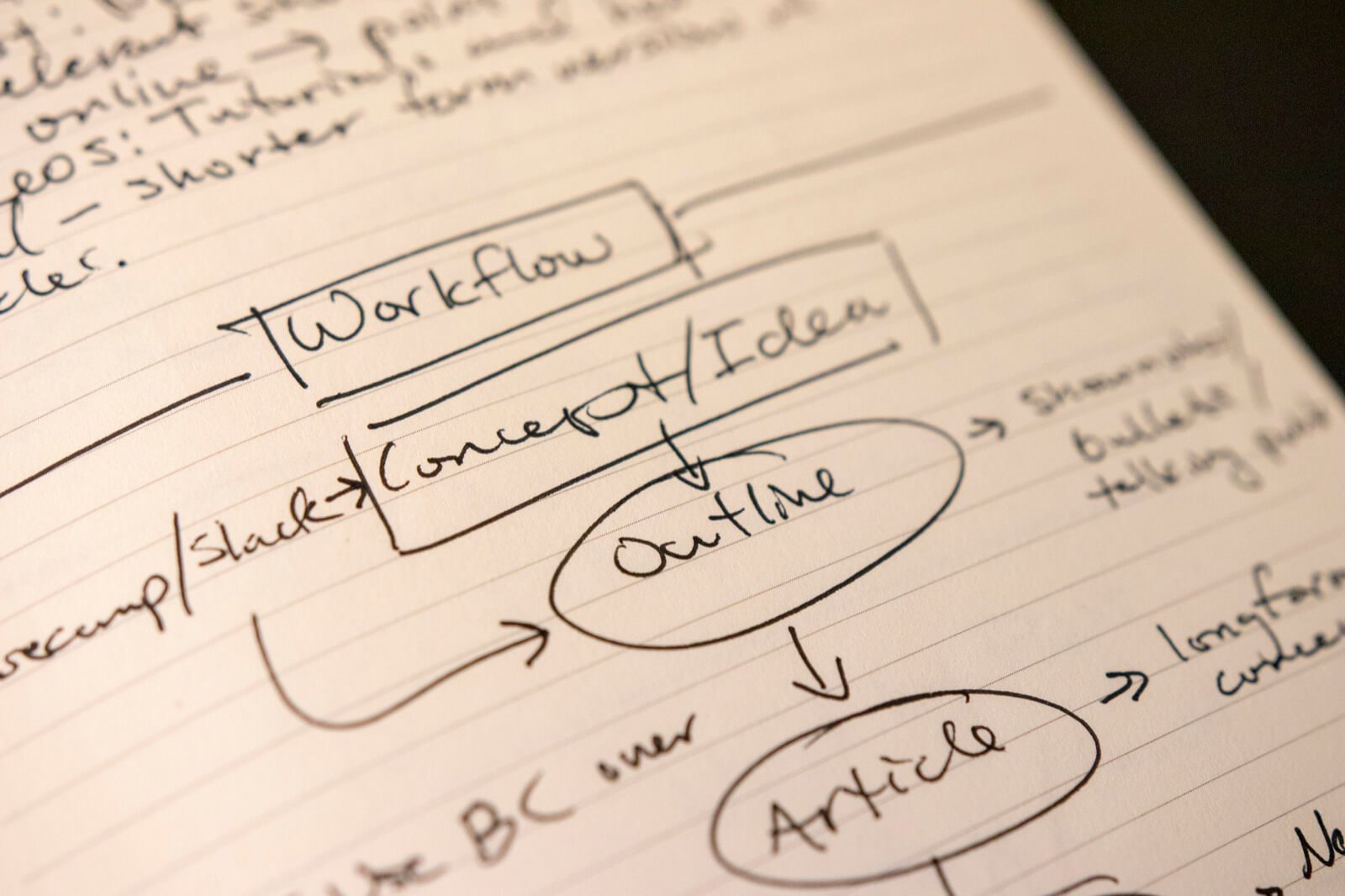 Do I write down things to do or remember? Absolutely. However, they always made it into a digital list eventually, so there wasn’t need to reference the notes later.

Plus, I found that just the act of writing something down helped me better remember whatever I was jotting down.

Now, I keep a stack of Full Focus Notebooks on hand alongside my planner.

By merely assigning one page per topic, I do my sketches, notes, and brainstorming in a separate notebook while keeping all my daily tasks and notes confined to the Full Focus Planner.

No more scanning, no more referencing.

I never thought that switching to a paper solution for both my daily agenda and notes would actually improve how much I accomplish in a day, but here we are.

For the longest time, I was under the impression that the most technologically advanced solution is the best solution.

What I’ve come to find, however, is that this isn’t always the case.

It’s easy to fall into this line of thinking when you can order just about product or service instantly using the supercomputer in your pocket.

However, as I noted on previously, it’s typically the most straightforward solution that’s the best one. Using paper, has many scientific benefits as well, it turns out:

The benefits of writing continue long after we’ve mastered the basics of penmanship. A simple study conducted in 2015 had women aged 19-54 either handwrite, type on a keyboard, or use an iPad to write words. Those that had written by hand were significantly better at recalling the words they had written. The only difference in the study was the mode of writing, indicating that physically shaping words helps us to remember them.

Haptics studies, which look at touch as a mode of communication, suggest that visuomotor skills are the reason for this phenomenon. Touch is an important sense, and when we engage across multiple sensations we are better able to tie things together, recall them later and, in short, learn. The feel of a pen being delicately manipulated to produce the small scratches of ink that make up words on paper is far more tactile than fingertips pressed against slabs of plastic.

When it comes to productivity, the fewer barriers it places between starting and finishing something, the better. So it’s tough to beat paper in this department—a tool for which you never have to fear a dead battery or notifications that distract you from the task at hand.

One thought on “Note-taking and the Full Focus Planner”