Mobile apps are a great way to engage your customers. Unfortunately, having an app developed usually costs a fortune, so, in most cases, only big brands can do it. And learning to build one from scratch takes time, so that is usually out of the question as well. Of course, if your core business is an app, then it doesn’t matter or how big your operations are. For restaurants, clothing stores and any other small non-app-centric brands, however, mobile apps seem to be still widely considered a luxury.

But this could all change soon. With the emergence of build-your-own-app tools and services, anyone—regardless of technical skill—can now build fully functional apps at a fraction of the cost. Remember when WordPress (and other similar services) came out and gave non-developers the power to create their own websites? It’s like that but for apps. 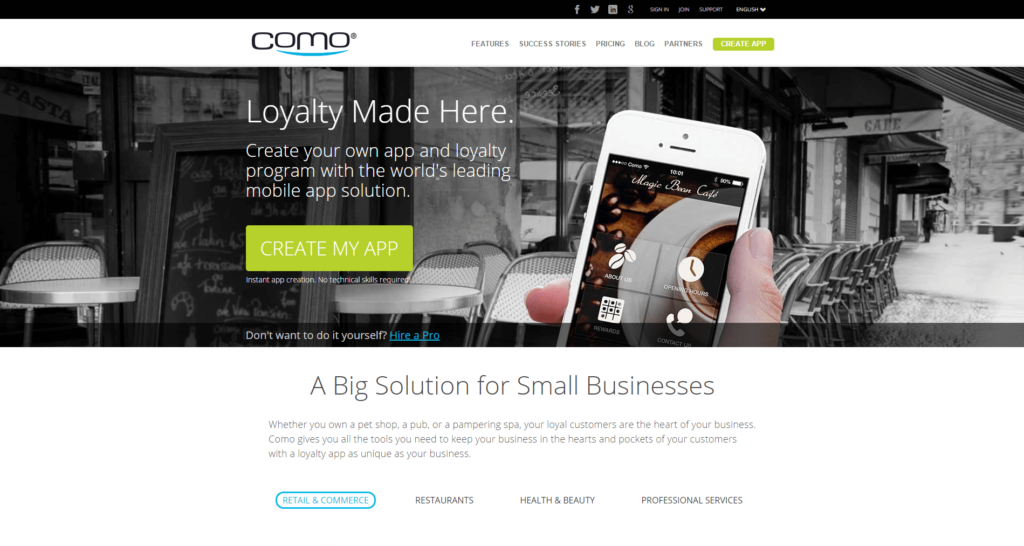 For as little as $41 a month, you can build a feature-rich app for your business with Como. And we’re not even talking about some generic app here. With over 25 unique functions at your disposal, you can make yours as useful and relevant to your customers as possible—and then update it anytime you want—so they’d want to download it.

And, speaking of downloads, Como does not put any restrictions on the number of users that can download your app so you won’t have to worry about paying extra even if it becomes a viral hit. In fact, Como even has analytics and promotional tools in place to help you boost your app’s popularity.

But it’s not all about the apps at Como. They also help you grow your customer base with their full-featured loyalty program engine, which seamlessly integrates with any app you make. It allows you to give out discounts and various rewards to both existing and new customers. 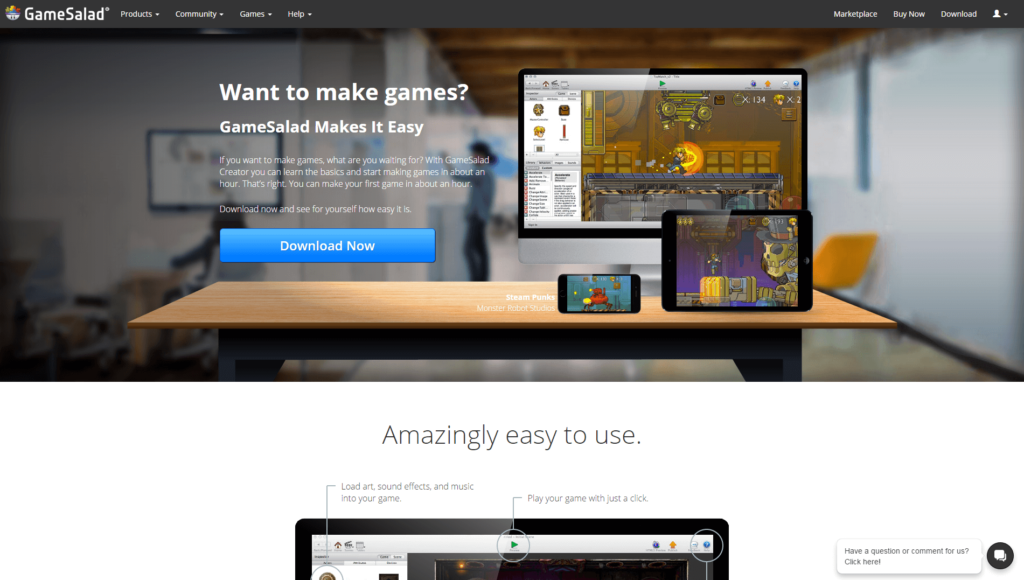 Everybody loves games—and that’s precisely the kind of app you’ll be building with GameSalad. For as low as $19 per month, you can create and publish your own games without having to write a single line of code.

Everything in GameSalad is drag-and-drop, and they have a host of popular game behaviors in their library so you can just click on the ones you want and then easily apply them onto any of your game’s actors. And there’s a fully integrated physics engine too so you don’t have to program game mechanics from scratch either.

Of course, once you’ve created the perfect game, you’d want to share it with the world—and GameSalad helps you with that as well. 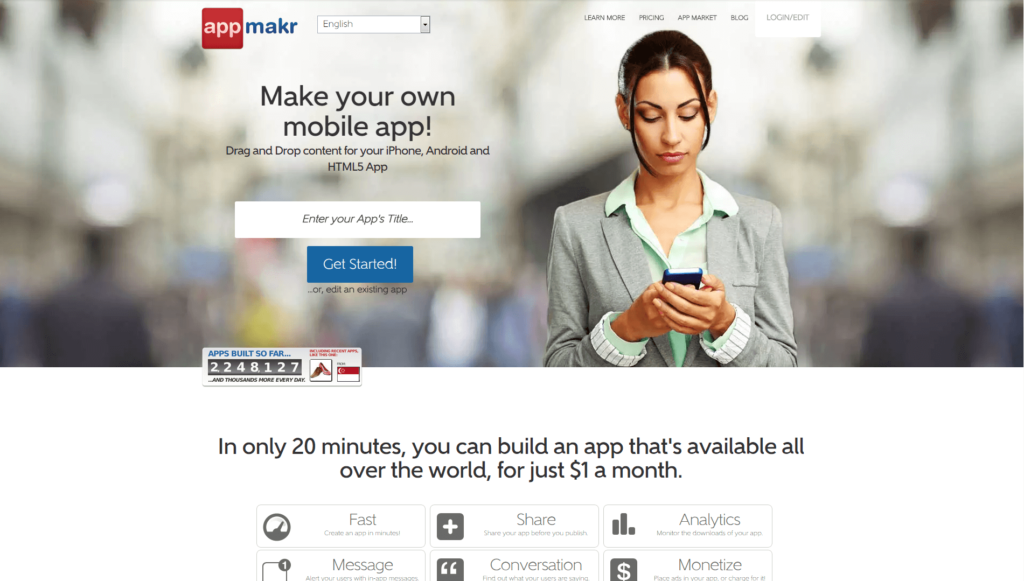 How about something that’s even easier on the budget? Appmakr promises you’ll build and publish your first app in just 20 minutes for just $1 a month. I don’t know about you, but that sounds like a pretty awesome deal to me!

You can either build an app from scratch or just edit an existing one so that you can get the hang of it. And just like with GameSalad, everything on Appmakr is drag-and-drop as well.

You can also use the service to build a mobile website in case your desktop site doesn’t have a mobile version yet. 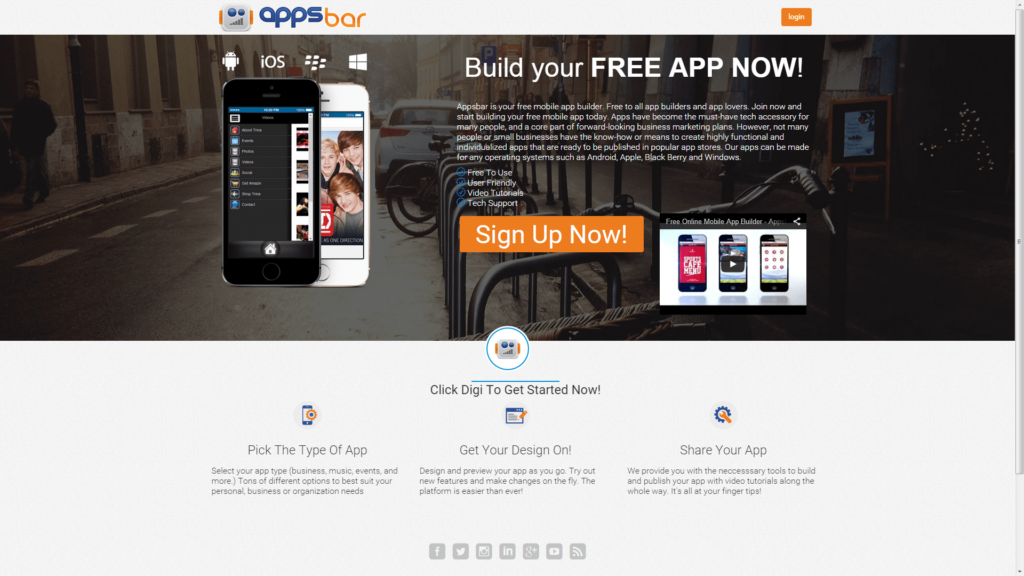 What’s even better than $1 a month? How about $0? Yes, Appsbar is 100% free. You can create and publish as many apps as you want, and they’d even help you make sure that your apps all have what it takes to get published (based on the requirements of all the major app markets) at no extra cost!

The only catch is that you can’t make money off your Appsbar apps, and major app markets like Google Play and the App Store would still charge you for hosting. But the good news is you can host your Appsbar apps for free on Appcatch, Appsbar’s app market, instead.

How about you? Do you know of any other similar app-building tools? Share them with us in the comments!